In this Ask the Developer, we sat down with Dumpling Design, one of the winners of the Indie Dev Prize at Casual Connect Europe 2018. Nine winners were selected for an all-expenses paid trip to San Francisco, where they participated in a workshop at our office. Winners spent three days being trained by our experts in monetization and app optimization, and they received advice on how to grow their businesses. 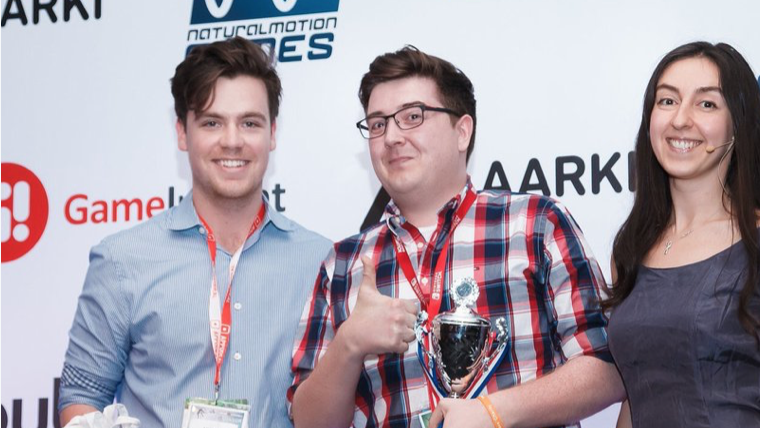 Dumpling Design, an independent games studio based in Sheffield, UK, is led by CEO Travis Ryan. Ryan is a veteran in the games industry, having worked for companies like Sumo Digital, NAPS, and Rare. We sat down with Ryan during his trip to San Francisco to talk about what makes Dumpling Design unique, their success with Dashy Crashy (iOS), and where mobile gaming is going next.

Lewis Leong: Tell me a little bit about your background. How did you get started in games development?

Travis Ryan: I got into video games almost 20 years ago now. Street Fighter got me into games and I remember studying the manual and learning the moves. I was fascinated with games in general. When I was a kid, my dad had an Asteroids cabinet and that got me into games.

I was doing art in college and I got a job at the local arcade. My job was to clean and fix the machines and the rest of the time, I would sit and watch people play video games all day. I did that for a year and in a weird way, that’s how I learned game design. Just being around arcade games seeing what attracted people…I just absorbed all that. Wacky Racers on the SEGA Dreamcast

My first proper lead design gig was Wacky Racers on the Dreamcast, which was great. That went really well. I cemented myself as a person who made arcade racers. Later on, Rare got in touch and I worked there for three and a half years on some digital experiments. We were chunking the games down to make them instant snacks. I was looking at a lot of mobile games to understand that space and I started designing.

LL: How did you transition to mobile? What have you learned being on the console side of games development?

TR: It’s all about how immediate your game is, unlike console. You have the buffer of fluff for console games because you know the player is dedicated. For mobile, you have to grab their attention straight away, otherwise they move on. From a design point of view, that has been one of the biggest challenges.

When you’re trying to pitch an arcade game, [console] companies want a $50 box product. There is an audience for [arcade games]. It’s just in everyone’s pocket.

Apart from the Switch, consoles are stale, and I hope they will learn from mobile. Switch has streamlined a lot of things down and I always recommend it to families.

LL: Tell me about your first mobile game, Dashy Crashy. What did you learn from it?

TR: Dashy Crashy is the smallest project I’ve worked on, but it’s the longest project I’ve worked on. We had to roll it out during the holidays and it got featured [by Apple], which did very well for us. [Editor’s note: Dashy Crashy was downloaded over a million times over Christmas weekend when it launched.] That game now has over 5 million downloads, purely organic. We never did any UA or anything. We come from the perspective of offering value. We never experimented with UA because we just didn’t have the bandwidth for it. Our speciality is making great content.

LL: Why did you decide on the “pay-what-you-want” model for Dashy Crashy? What were the results?

TR: It turned out very well, actually. If users buy anything, they remove ads. We still have one-star reviews complaining that there are lots of ads and at first, I was really sensitive to it. So that made us think, “Why don’t we offer the cars up for rent?” People loved that system, but money went down about a third. It’s a constant challenge.

It’s a really interesting trend with Fortnite—everyone can play for free, but you pay for engagement. They pay to play a “proper game” with a VIP pass.

LL: Tell me about your current game, Smash Tanks, and how you guys got into AR games.

TR: We decided to work on separate side products with the goal of making a mobile board game, and that eventually became the game Smash Tanks. Jared (Technical Lead at Dumpling Design) kept sharing gifs and screenshots but we eventually shelved it. Then Apple announced ARKit and a lightbulb went off. We thought, “We could do this! We have a board game!” We did that and it was bloody awesome, and super quick. Now our 2D game was totally transformed.

Apple reached out and wanted us to join them in London for an ARKit showcase. We were showing [Smash Tanks] to the press and Tim Cook was there. All in all, we made that game in four months on new technology, and we were featured by Apple. It went a little viral with outlets like LADbible picking it up.

LL: What are your thoughts about ad monetization in AR games?

TR: Our general thought is that if you put a traditional ad in AR, it’s like being punched in the face. You’re so immersed, and it’ll jolt you out of the experience. We are working with smaller teams to try some stuff, but it’s probably going to be more like product placement. Why not have dynamic billboards in your racing game or battlefield?

I think AR has challenges with premium anyway because you’re trying to communicate a new technology with an audience, and if you put a premium barrier, they’re not going to play. We want people to get a taste of it first.

LL: Do you think AR is the future of mobile gaming?

TR: There’s no denying what AR can do. There are still thousands of people playing Pokémon Go. Having that extra layer of reality is fascinating. It’s not going to replace mobile gaming, but it’ll be another pillar of gaming. This is probably a conversation for 25 years in the future.

LL: What’s in the future for you guys? What other AR games are you guys working on?

TR: We’re still dancing around creating an AR fighting game. We’re also thinking of doing a Scalextric game in AR, which will be more like the end of the year. The rate that Apple is moving with ARKit is pretty staggering. If you’re thinking of doing an AR game on Android and Apple, you’re pretty much thinking about two SKUs (because the platforms are so different), especially if you’re pushing the technology.

Apple’s outreach and support is very good. They also have good hardware to work on. With Google, it’s more like the Wild West. In our general experience, it’s harder to reach out to Google.

Amazon and Apple are out there looking for stuff, but I don’t get that sense about Google. You’d think Google would reach out about ARCore, but as a platform, it’s not as powerful as ARKit. The general sense was that they were going to push ARCore, but that didn’t happen. Clearly the biz dev isn’t talking to editorial and any future AR development on Google just doesn’t make sense for us.

Be sure to check out our previous interview with Lionbird Games. If you would like to be featured in our Ask the Developer series, please email [email protected] or ask your account representative.

10 years of games in the App Store: From frustrated fowl to crumpled confections [Infographic]

Ask the Developer: East Side Games on making counterculture games and licensing an IP